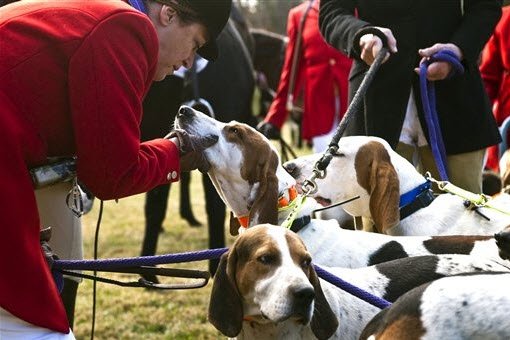 Fox Hunt Steeped In Tradition — But This One Lets Prey Live

A meadow 5 miles from Port Columbus looks like a 16th-century oil painting on the first day, a Saturday morning, of the formal fox-hunting season. At the sound of the huntsman’s horn, 20 hounds stream down a hill and onto the field – where 46 riders and horses have gathered for the Blessing of the Hounds, the opening ceremony for every fox hunt worldwide and throughout history.The attire, like everything else in the sport, is rooted in tradition and purpose: belts to be used as stirrup leathers, stock ties to become bandages, manes in braids and hair tucked under helmets to prevent either from catching a tree branch.

Riders kneel before a minister to receive a blessing and the medal of St. Hubert, the patron saint of hunting since the Middle Ages. Before mounting their horses, they accept another old-time parting gift: a whiskey sour to boost their spirits.

Then the minister leads a prayer to send them off:

Shield the riders from danger to life and limb, and may the chase bring them vigor of body and clearness of mind.

And, with another sound of the horn, the hounds point their noses to the ground and tails to the sky in search of the fox’s scent, racing into the woods with the horses following furiously behind.

So begins the day for the 85-year-old Rocky Fork Headley Hunt, which hosts twice-weekly outings both on the grounds of the Rocky Fork Hunt & Country Club in Gahanna and on private properties in surrounding counties.

For the Gahanna club, like 170 others nationwide, fox hunting is part outdoor adventure, part historical preservation – with one major change for the modern era.

The sport, originally intended to eradicate chicken predators on farms, no longer involves killing or capturing foxes. Members of the hunt, ranging from an 83-year-old man to young girls on ponies, try only to find and chase them.

“We don’t want to catch the fox; we want them there for next week,” said Sharon Chappelear, one of three masters of foxhounds who oversee the hunts.

“The fun of it, even if it’s a bad day, is watching the hounds work and try to pick up the scent.

“And if it’s a good day, you follow, and you run, and you chase – and you never know, when you get on your horse, what the day is going to be like.”

Today sets off at a gallop, with horses in single file following the hounds up hills, across muddy ditches and over fallen logs in pursuit of a scent – best found in the cold weather of the November-to-March fox-hunting season.

Master of foxhounds Sally Crane, leading the riders, periodically gives the pack a short toot of the horn (“I’m still here”) or a longer blast when the hounds have strayed out of sight (“Come back to me”).

The hounds – owned by the hunt and cared for by a professional kennelman – learned the calls as puppies, when they were leashed to older dogs in preparation for their future jobs.

Instinct, though, is what draws them deeper into the woods, where they start barking excitedly to convey their message: They found a scent – and the chase is on.

Riders duck to avoid dangling branches as they gallop through the maze of trails, weaving among trees like skiers on a slalom course.

At one point, a teenager fails to decide on a direction around a sapling, instead plowing through it to become the first of two riders to fall.

Moments later, however, she’s back in the saddle, her pony stepping delicately across rocks as the hounds, up to their chests in water, follow their noses across a creek.

The trails wind through silent ravines and meadows, seemingly far from civilization, to the edges of the club’s property – near yards with swing sets and amused neighbors taking pictures from their driveway.

Decades ago, the hunt territory spanned more than 1,000 acres, allowing the hounds to chase a scent all the way to rural Westerville.

Now that the land is bordered by strip malls and subdivisions, it isn’t always ideal for fox hunting.

Foxes run circles around their lairs, but the deer and coyotes that have found a haven at Rocky Fork can compel the hounds to follow them off the property.

The hounds have ended up on soccer fields, at Gahanna Lincoln High School and near the McDonald’s on Agler Road – an area that the hunt members jokingly call “McDonald’s Corners.”

And on this hunt, by the time riders negotiate an area with dangerous wire fencing, half of the hounds are nowhere to be found.

Members will eventually use GPS trackers on the hounds’ collars to locate them 2 miles south of the property. But with the horses sweating and riders’ legs aching after 90 minutes of riding, it’s time to call it a hunt, anyway.

The members chat as they walk back to the property entrance, enjoying the rolling scenery that, the first time through, seemed a blur.

Still in their boots and breeches, they drive their horse trailers next door for lunch at the country club, leaving their horses happily munching hay in the lot.

Over a couple of midafternoon cocktails, they discuss the day, its mishaps and the thrills of riding in nature and not, as many are accustomed, in circles around an arena.

“Horses were made for this; it’s the most natural environment for them,” says club member Pam Graham, a horse trainer in Alexandria. “How could you love riding horses and not love this?”

There had been no fox in sight that day – maybe no fox at all – but no one seemed to mind.