The inaugural Great Lakes Invitational Hound Show hosted by, and held on the spectacular grounds of the Chagrin Valley Hunt, took place on Saturday, July 13, 2019. Loraine  and I took six hounds to participate: 3-year-old males – Ringo, Robert, Rumble, 7-year-old Pistol, as well as 3-year-old bitches– Quiver and Quirk. When we arrived, we were met by CVH Huntsman Colin Brown (FYI, Colin ran the spontaneous horn blowing contest at the RFHH Ball – aka, the guy in the kilt…). We did a quick tour of the show area – a lovely, shady venue on the lawn sporting a sturdy (and TALL) fence enclosing the hound showing area, surrounded by spacious tents and seating on 3 sides as well as tree-shaded chain-linked day-kennels for each club to use so that hounds could be at the ready when their classes were called. Then Colin showed us our hounds’ guest quarters and helped us get them from the truck to kennel, and situated.

As nervous as I was about actually showing the hounds (not ever having done it before), most of my nerves were focused on how the hounds would take to the travel, new kennels as well as the show ring itself. Happy to report that the hounds nestled comfortably in the newly refreshed straw of the hound truck for the drive north, and adapted to their lovely, cool guest quarters with apparent ease. While they did not eat much kibble over the next 36 hours, they drank with abandon and were rested and fresh for the big day. 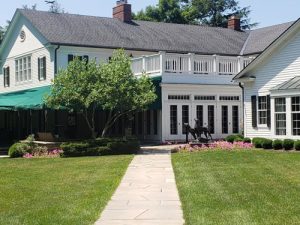 Loraine and I stayed in a spacious (and mercifully COOL) room in the CVH Clubhouse. This was a bonus in many ways, including the fact that we had scant time to shower and dress for the Friday evening cocktail party also held in the clubhouse. The party was lovely and, as is the norm when foxhunters converge, conversation flowed with ease. Erstwhile strangers became instant friends, and then dinner companions as the cocktail party migrated (on foot) across a picturesque bridge into Gates Mills and into a fabulous restaurant called ‘Sara’s Place’. MUCH later, Loraine and I – again patting ourselves on the back for opting to stay at the CVH Clubhouse, “ambled” cheerfully back across the bridge, and to bed.

The next morning, a quick (and satisfying) check on our hounds followed by a delicious breakfast in the clubhouse, led to the serious business of hound clean-up and preparation. Baby wipes across smudged hound bodies, ear inspection and last-minute pep-talks were accomplished. Then, right on cue, Robyn and Neil Fillman arrived to help escort the ‘boys’ to the day kennels by the show ring.

Our Judges for the show were David Twiggs, the Executive Director of the MFHA and Andrew Barclay, former huntsman for Green Spring Valley (1981 – 2001) and the current chief instructor and mentor for the MFHA Professional Development Program. There were 4 foxhunts showing hounds – Chagrin Valley Hunt, Rolling Rock Hunt, Miami Valley Hunt and Rocky Fork Headley Hunt. Our two favorite Basset Packs were also present – Ron Ausman’s Okaw Valley pack and Lei Ruckle’s Three Creek Bassets.
Showing hounds with Lei was her joint master, Laura Carpenter Balding who had come in from Missouri for the show.

As we learned, showing our hounds involved two aspects. The first was to present the hound to the judges for confirmation assessment. While our hounds stood well, a little kibitzing from the judges on how to present them best was WELL received by the RFHH team and implemented as the classes progressed. The second aspect is to show the hound in motion. Most huntsmen/handlers employed the ‘biscuit toss’ technique to move their hounds. The handler tossed a biscuit for the hound, who runs to it, and once snapped up, makes a sharp turn back to handler who then throws another biscuit in the other direction – a full 360-degree picture of foxhound athleticism.

Well…….lets just say that we have some work to do on this part of showing hounds. The MFHA rules for hound shows stipulate that only dry biscuits (read: NOT hotdogs) may be used in hound presentation. Although I have not actually compared them myself, our hounds were unanimous in their preference for the wet meaty hotdog bits and profoundly eschewed the dry milk bone bits, leaving Loraine and I to come up with acceptable alternatives to show their ambulatory prowess…..more on that later. 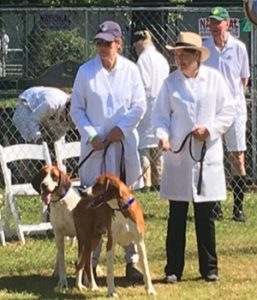 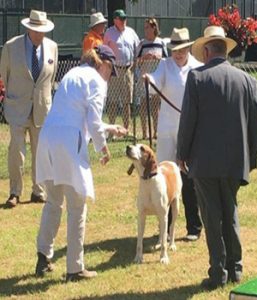 The first class for us was the Entered Males. Loraine and I presented Robert and Ringo on our leads. They were both favorably received by the judges but, could not be persuaded to show that their beauty was in function as well as form. Instead, they sweetly greeted the show photographer, ring steward and some of the other hounds in their off-lead jaunts about the ring. Just so you know – our hounds were not the only ones to choose to amble over rather than running in the ring. Out of the four hunts presented, only two hunts had shown hounds anytime in the past 20 odd years, and both by a professional huntsman. That said, even a few of the professional’s hounds had also not quite grasped the proper response to the biscuit toss. In any case – Loraine and I left the first class sans ribbons but better educated and, of course, with excellent hounds in hand.

Our next class was the Stallion Class and featured Pistol, the proud father of our ‘Q’ and ‘R’ hounds. Pistol presented well in-hand, but, again, opted to show his sociable side as opposed to exerting himself over a dry biscuit. I noted that the other hounds presented were also notably younger than Pistol. Not that Pistol is officially ‘long in the tooth’, but his muzzle and eyebrows are noticeably lighter than in his earlier years. Nonetheless, Pistol came away with a third-place ribbon and the crowd went wild! Well, Loraine and I did anyway. Actually – there was great comradery amongst the competitors, so there was much cheering over ALL the hounds. 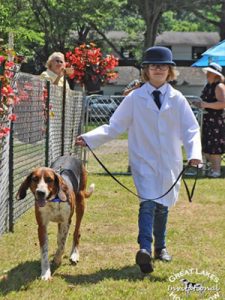 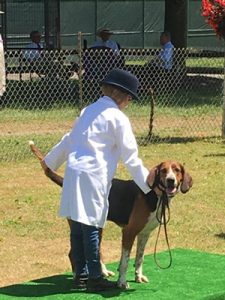 Rumble’s turn came in the Junior Handler’s Class which took place during the lunch break. As some of you know, Rumble was in the capable hands of Piper Ellis with her parents, David and Solange during our Blessing service last November. At that time, Rumble was just past 2 years old, and while friendly – not overly bold, and a bit sensitive to noise. With the quiet help of his girl Piper, Rumble’s Blessing experience was a great positive for him, so it was an easy call to ask if Piper would handle Rumble in this class. Fortunately, Piper (et al) agreed and the picture says it all. A peaceful and happy Rumble went everywhere Piper did in the ring and stood very well when presented to the Judge (Mrs. Laura Robinson Mock, MFH Chagrin Valley Hunt). The pair came away with a fourth-place ribbon in the class, but remain, as always, number one in our hearts.

Lunch – a beautiful affair with burgers, brats, fruit and leaf salad, fabulously cold water and chilled Prosecco in the shade of the tent and trees – accomplished, it was the girls turn to go. We retired the boys back to the main kennel for some well deserved quiet time and brought Quiver and Quirk to the day kennel.

The Entered Bitch Class was called and Loraine and I proudly presented the hounds to the judges. Determined to show their movement, as well as their beauty, and knowing that the dry biscuit was NOT going to prove incentive enough, we opted for a non- traditional approach. When the judges asked us to remove the leads and show the hounds ‘at large’, I took off in front of them shouting “Hark, Hark to me!” A move definitely not in the MFHA playbook, it was genially tolerated by the judges and both hounds showed off their moves – at least for a brief spurt. Fortunately, it was enough for the judges to call Quirk back into the line-up for another confirmation look, and ultimately earn her a third in the class (the most hotly contested class of the day – 10 entries!)

Tired, hot and very pleased with our hounds, Loraine and I took the girls back to chill with their kennel mates while we settled our room in the clubhouse and prepared to leave. The feat accomplished, we were just heading back to the kennels to load hounds when we were pulled (well – there was actually very little encouragement needed) into the pub room at the clubhouse for parting cocktails and more visiting. Both judges, several huntsmen, masters and lots of competitors cooled off, swapped stories and wet our whistles before heading off to our respective kennels. For the record, I had two cups of (much needed) coffee since I was driving – – Loraine SAID she had coffee but….. Two hours after we intended to leave, we finally did – and had a blissfully uneventful ride home. The hounds returned to their kennels, drank heartily, were snuffled noisily by their mates from stem to stern, and most retired with a sigh, to their beds. The one exception was Pistol. I did one more check of the traveled hounds before closing the kennel and did not see him in his kennel. I wondered if he had gone out to his yard, but a quick look assured me that he was not there. My tired mind was starting to come up with unpleasant scenarios as I mentally re-checked our entry back to the RFHH kennels….I know he was there when we arrived….. Finally, squatting down to look, I found Pistol underneath his bench, sprawled out all the way in the back – and snoring. Looked like a great idea – Loraine and I blew kisses to them all and took ourselves home.

SPECIAL Thanks to Neil and Robyn Fillman for the pictures and support – and to Loraine, who boldly went with me where neither of us had ever gone before!