Excerpts from Hounds and Hunting through the Ages by Joseph B. Thomas, MFH (©1928, Windward House, Inc.), the first comprehensive book on hunting and hounds ever written in America.Last time, Mr. Thomas described fox hunting in England.  In this installment, we read about Irish hunting! 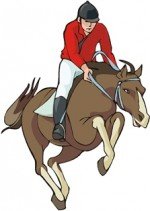 In Ireland, there is a certain proportion of hedges…but the typical enclosure is, of course, the Irish bank.  This is a formidable-looking obstacle to one who is unused to it…Ireland apparently never had much timber for fencing, and doubtless at one time there was much surplus labor, or, probably, the Irish banks never would have been brought into existence.  They are not only enclosures, but the ditches which usually flank them help to drain the land…The surest way for a novice to cross an Irish country is to ride an Irish horse, and leave it to the horse, which has been used to this particular game—scrambling over the gaps in the banks—from colthood, and perhaps later ridden bareback by some gossoon [a young servant boy] with more enthusiasm than discretion.

A typical Irish bank is anywhere from four to seven feet high, frequently several feet wide at the top.  It has a deep ditch filled with muddy water on one or both sides, and often a hairy hedge on the top…The sides of the bank are quite steep, but are usually covered with luxurious strong sod, except those which are…stone faced.  Woe betide the ambitious Nimrod who attempts an Irish bank on which the sides and top are not firm.  Such a bank is known as “rotten,” and frequently precipitates the unwary horseman into the yawning Slough of Despond before or behind him.

A big, strong bank is better to jump than a little one, as a horse properly “in the know” will jump onto the bank, scramble to the top, change legs, slide part way down the opposite side, and pop over the ensuing ditch; while in the case of a small, clean bank, he might come to grief in a hurry.

Mr. Thomas related this story:
…There was once a man who went to Ireland for a rest cure…he fell in love, and was inveigled onto a horse; he began to think hunting was a tranquil pursuit, when:

“Tally ho!” yelled voices from the gorse.  “Go—on—away…!” screeched someone else, and the whole world appeared to go mad…He was content to gallop on until he saw an unbroken line of green bank in front, and then he decided to go back to the road through the fields he had come to, and jog along to see what happened.  He was much impressed by all the excitement, had even shouted a little himself, crying joyously that the dogs had found the trail; but he had no intention of going on.  He pulled at the reins to get around, and—found he was mistaken; Blackbird  [his horse], who had gone easily when her bridle was slack, took this as a sign to take hold and quicken her pace, and did both immediately.  The thing upon her strong back rocked and bumped strangely, but she meant to carry it as near hounds as possible.  The mare had a mouth like iron when she chose.  Acland found that he could in a manner guide her, but she did not mean to stop; she dashed on, straight for that high bank, while his heart pumped like a steam piston, and he used exceedingly bad language.  It rose, high and unbending; his endeavours to turn were now frustrated by horses to right and left, heels in front went up in a sickening fashion, another horse rolled back.

“Great God!” said Alexander Acland, with whimpering wrath, “and I must jump it.  I must.”  He wreathed his hands in the mane.  “Great—Oh–h!” 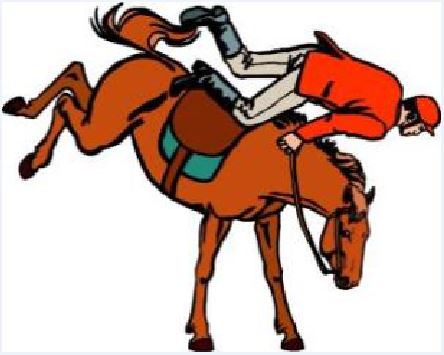 Blackbird dropped to a trot, crouched on her powerful quarters, and rose, Acland rose with her, gripping the mane as the good mare lighted on the bank; next moment, with a sensation of being kicked into the next world they went off.  He lost both stirrups in the downward swoop, and grovelled on the beast’s neck, praying for help.  She shook him back, and strode away, until, with a certain sense of elation, Acland realized that the fence lay behind and he was still upon the back of the animal which had jumped it; moreover, that he was very close to the flying pack.

It is not difficult to understand that with such necessity for so much jumping up, balancing, changing legs, and jumping down, a particular type of horse has been developed in Ireland especially suitable, by virtue of good shoulders and strength of loin and hocks, to meet the requirements of the country.  Hence, in Ireland, a horse which on the average is not quite so quick as the thoroughbred horse, yet one that has plenty of blood seems to suit most people best…

Our very own RFHH member Loraine rides her beloved Murphy, an Irish Sport Horse who is a draft, thoroughbred, and Connemara cross.  He carries her with nonchalance, disdaining our much smaller challenges, and also provides his trainer Stephanie with a safe and easy go when they whip-in or even hunt the hounds!

So now we see that these paneled coops were used in America, where there is so much wire fencing, to allow horses to jump the fence…thus “paneling.” Of course, we now place these paneled coops completely out of context on their own in the trail where no fence goes—just for fun!….Besides placement of coops, our use of the term “paneling” in modern times has also come to refer to clearing trails. Read on for more about paneling and its relationship to wire as it impacts our ability to negotiate hunt territory…LB