Excerpts from Hounds and Hunting through the Ages by Joseph B. Thomas, MFH (©1928, Windward House, Inc.), the first comprehensive book on hunting and hounds ever written in America. In this installment Mr. Thomas tells us how the terms “oxer” and “paneling” came to be. Many of us have puzzled over this, and now we’ll bring these expressions out of their historical mists. 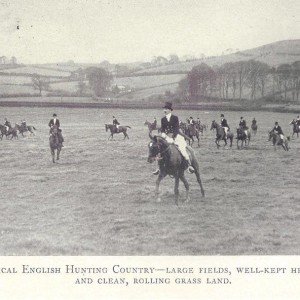 In England, the typical jumping is over hedges with a ditch on one side, or both sides, sometimes having in addition single, or double, oxers—which pleasant (?) device is a low rail to keep cattle out of the ditches flanking the hedge; hence, English jumping is broad rather than high, so a horse must be schooled quite differently than for America, and ridden in a different manner.

Of course! The broad, double-element oxer that we have carried into our show rings is reminiscent of the hedges with rails which in England were used to keep the oxen in! …LB

In certain sections of Virginia, what are known as “chicken-coop” panels came into use about twenty years ago. It is not certain who originated the idea, but they were used rather extensively by the late John R. Townsend, when a master of the Orange County and Middleburg Hunts. Their virtue rests in the fact that a single panel can be made of sixteen-foot boards—the distance between the ordinary posts in a wire fence; also, they can be placed over a wire fence without cutting it. This is done by drawing the staples on two posts, bending down the wire, and placing over it an inverted V-shaped coop made of boards which are fastened together on a framework of 2 x 4 joists. It is a formidable-looking obstacle, although it hardly needs to be four feet high to prevent cattle form jumping it, because it is wide at the bottom, and cattle would have to jump wide as well as high to clear it. This they seem to dislike to do. Ridden horses jump this type of fence well, but from an aesthetic point of view it is anything but beautiful, and compared to a simple bar-way it is expensive. However, where landholders dislike to have their fences cut, it is easy to obtain permission to put up such a panel where ordinary paneling would be impossible.

…In a country which had to be cleared of trees before it could be plowed or used for pasture, the use of split-rail fencing was originally, of course, quite natural. It was…one way of disposing of the trees…Unfortunately, the chestnut blight which started on Long Island some fifteen years ago, has killed every chestnut tree on the entire Eastern Seaboard, and no other variety of tree–not even oak—which is available and splits properly, lasts as long; hence, the use of the rail fence as an economic possibility is now fast disappearing.

…As to the use of wire, it does not seem to be generally understood by many people…that it is the quickest and most efficient means the farmer has of keeping 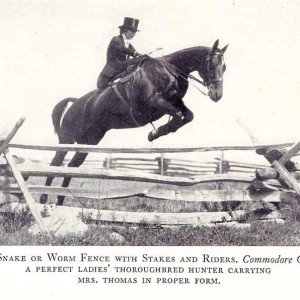 live stock within bounds…nothing is so wasteful of time to the generally harassed farmer as searching for lost animals which have escaped through inefficient fencing…no one would ask why farmers use wire (as if it were being done purposely to spoil sport) if they themselves had to spend dreary hours trudging about a country looking for stray stock.…In America, during the past fifty years…use [of wire] for fencing has entirely superseded in many localities the original split-rail fencing…

…Any game that is worth playing at all ought to be worth playing well; hence, it may be advisable to seize the bull, as it were, firmly by the horns, in considering ways and means of making a country ridable where wire, in greater or lesser degree, prevents following of hounds. This procedure has generally become known as paneling, and must be done in every American country.

This commentary on wire was written in 1928, at a time of use of barbed wire (whereas now farms are converting to high tensile strands). Today, decades later, we know too well that these old barbed wire fences are mostly down and hidden in underbrush, waiting for our horses to become entangled, often with a nasty strand caught underneath a shoe. Several of our Rocky Fork hunt staff carries wire cutters for use in emergencies! We are also cautioned to stay in line behind our fieldmasters, who guide us safely through hunt country, among other things oftencalling out “Ware wire!” As a final note about varieties of hunt country, read about Mr. Thomas’ description of hunting in France, with no wire at all….LB

…French hunting is largely in forests where the hunting rights are leased from the government. These forests are often extensive, but cannot be likened to American woodlands, as the rides [paths] are broad, cut straight from “round points,” like the avenues radiating from the Arc de Triomphe…and in these rides one may gallop at speed. Game and hounds can be seen crossing, and in large measure it is possible to see through the forest as much of the underbrush is kept trimmed from the local necessity of using fagots for fuel. The origin of this marvelous system of rides is very ancient, and doubtless was inaugurated in the royal forests, in order to facilitate the hunting pleasure of the kings. These wide, straight rides…carpeted with green grass…are marvelously beautiful to behold, especially when shadows formed by the filtering sunlight add variation to the intriguing vistas. As one canters along, pheasants, rabbits, hare, and perhaps a distant stag, or roe-deer, can be seen. 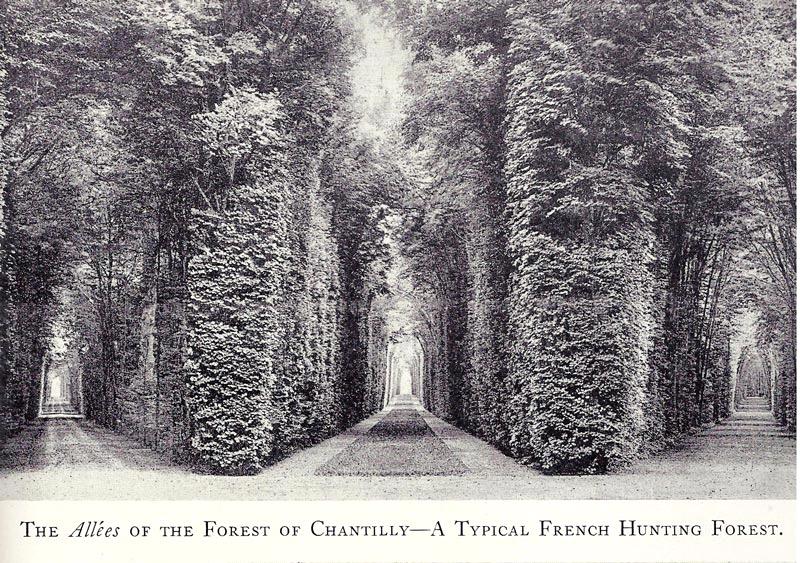 Next time, in our last installment, we’ll look at Mr. Thomas’ descriptions of the traditions which have brought us to be what we are in America: customs of dress, and organization of our hunt clubs…LB 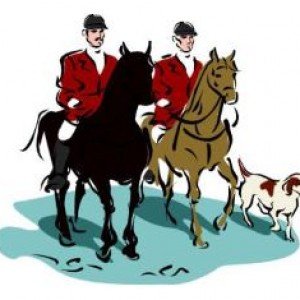