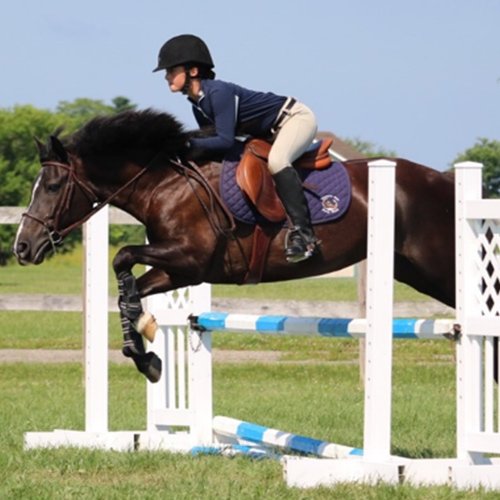 Kimberly Petty is 10 years old. She is starting 5th grade at Saltcreek Intermediate School, part of Logan Elm School District. Kimberly has been riding since she was four when she got her first ponies, Sparkley and Misty. She has been a member of Hunter’s Run Pony Club for three years now. She is rated a D3 in horse management and a D2 over flats and fences. She has plans to rate up to a D3 over flats and fences this fall. Kimberly enjoys the learning, teaching, and friendships that come with Pony Club. Kimberly actively competes in many Pony Club rallies, local jumper shows, as well as the Heritage Farm Mini Trials. She recently moved up to the starter division in August. Kimberly has a strong bond with her pony, Chloe, whom she has been riding for 2 years. Kimberly enjoys riding around the farm on an almost daily basis and spending time in the barn. Outside of horses, Kimberly enjoys softball, volleyball and basketball. She also enjoys spending time at Lake Cumberland with her family. Kimberly lives with her mom and dad, Jennifer and Barry, and her 6- year-old brother, Bret.